At 9:10 p.m. on Aug. 25, 1951, Dr. W. I. Robinson, professor of geology at the Texas technological College, stood in the back yard of his home in Lubbock, Texas and chatted with two colleagues. The other men were Dr. A. G. Oberg, a professor of chemical engineering, and Professor W. L. Ducker, head of the department of petroleum engineering.

The night was clear and dark. Suddenly all three men saw a number of lights race noiselessly across the sky, from horizon to horizon, in a few seconds. They gave the impression of about 30 luminous beads, arranged in a crescent shape. A few moments later another similar formation flashed across the night.

This time the scientists were able to judge that the lights moved through 30 degrees of arc in a second. A check the next day with the Air Force showed that no planes had been over the area at the time. This was but the beginning: Professor Ducker observed 12 flights of the luminous objects between August and November.

Some of his colleagues observed as many as 10. Hundreds of nonscientific observers in a wide vicinity around Lubbock saw as many as three flights of the mysterious crescents in one night. 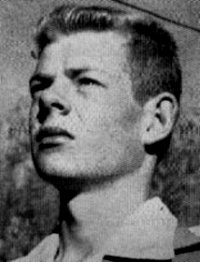 On the night of Aug. 30 an attempt to photograph the lights was made by 18-year old Carl Hart Jr. He used a Kodak 35-mm camera at f3.5, 1/10 of a second. Working rapidly, Hart managed to get five exposures of the flights.

The pictures exhibited by Hart as the result of this effort show 18 to 20 luminous objects, more intense than the planet Venus, arranged in one or a pair of crescents. In several photographs, off to one side of the main flight, a larger luminosity is visible... like a mother craft hovering near its aerial brood.

The photographs were taken at 5:30 pm and 10:37 pm. The three Texas Tech professors examined the 18-year-old's photographs, but could find no explanation for the photos. Witness Roger Dods heard a slight rustling or whooshing sound as the objects passed over head. He reported seeing them at 10:37pm. In late September, a report on the Lubbock Lights reached the Air Force.

The Air Force examined the pictures in great detail and could neither prove nor disprove their authenticity. Captain Edward J. Ruppelt, the Air Force officer who became the first director of Project Blue Book, traveled to Lubbock to investigate the case. Ruppelt later wrote a very good book about his experiences as a UFO investigator, called "The Report on Unidentified Flying Objects."

It was Ruppelt who interviewed an elderly rancher in Brownfield. The rancher claimed to have heard the "unmistakable call of the plover," a water bird with a one-foot wingspread and an oily white breast that "could easily reflect city lights."

But game wardens said that the phenomenon could not have been plovers (birds about the size of a quail) since these birds never fly in flocks larger than three.

T. E. Snyder, Jr. reported, "I saw something like people have been seeing and it definitely was ducks." Although not accounting for the unbelievable speed, a reflection from the Westerner drive-in theater caused some ducks to be illuminated. Everything seemed to point to flights of birds as the explanation of the mysterious phenomenon that came to be known as the "Lubbock Lights," and yet there are those who disagree.

Witnesses said they saw "dots" of lights flying in "U" and "V" shapes, passing in two and three-second intervals. The number of dots reported in the formations ranged from eight to nine to 20 to 30. The lights appeared in the northeastern part of the sky and proceeded in a straight line to the southwest.

The color of the lights was "about like the stars, only brighter," while others said they were either a blue or white with a slight yellow tinge to them. Others described them as appearing "as a string of beads," moving roughly in a semi-circle, and were "soft, glowing, bluish-green."

Dr. J.C. Cross, head of Tech’s Department of Biology, examined the 35mm photographs, and asserted, "It definitely wasn’t caused by birds." In Matador, reports were made of a "noiseless aircraft flying at a low altitude, without aid of propellers or wings." They said it was different from any aircraft they had ever seen. 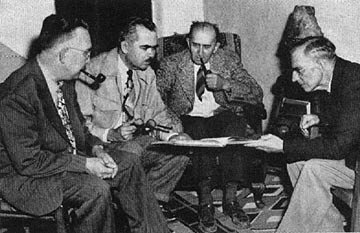 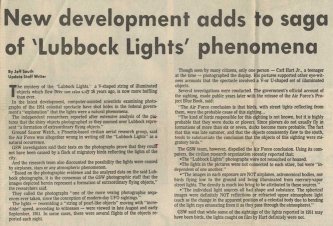 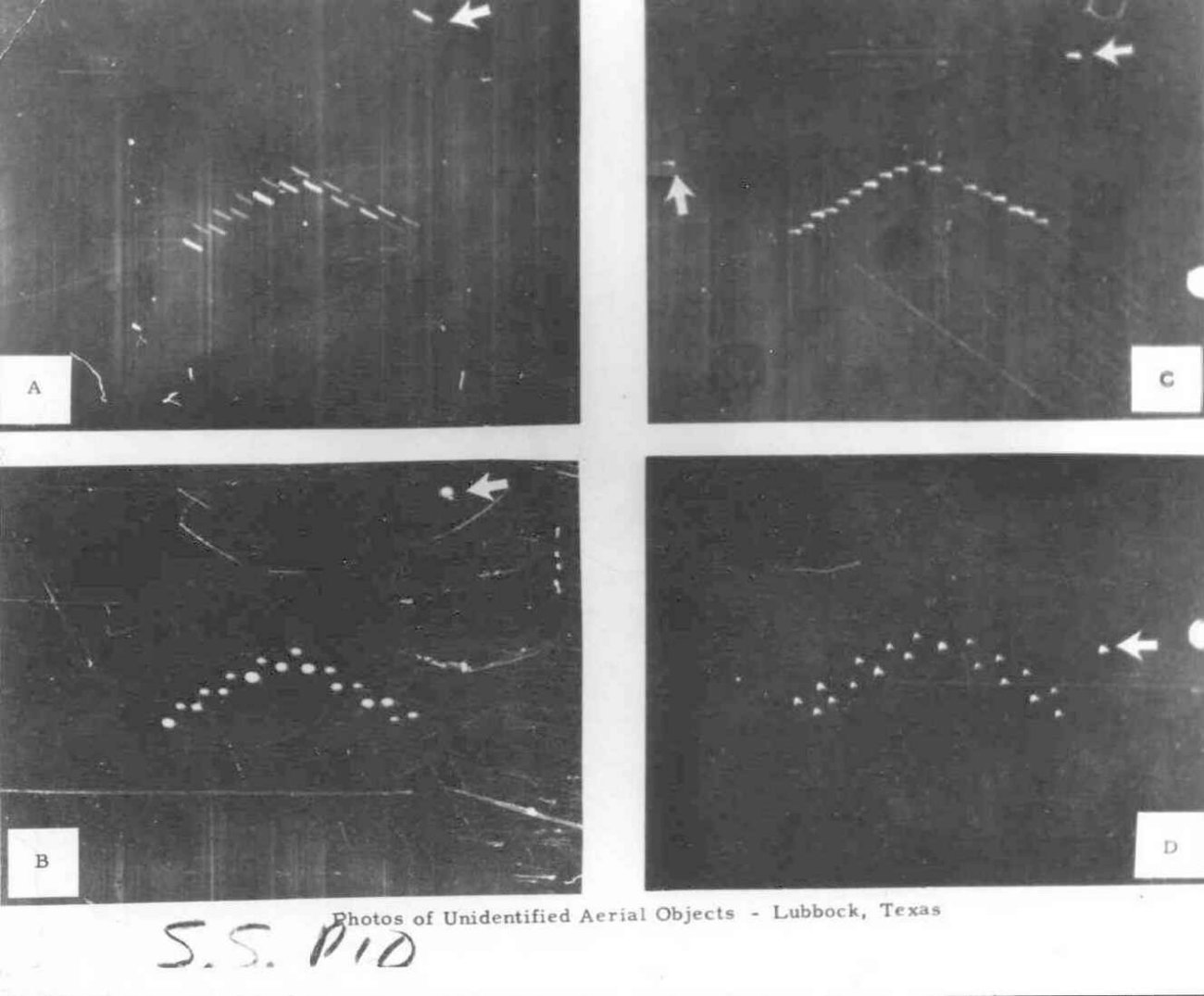 To this day, there are those who contend that Lubbock was visited by UFOs, while others say that it was merely a natural phenomenon. No one really can say for sure, but as is stated in the History of Lubbock, "Lubbock’s reputation is greater in scientific circles for the Lubbock Light Sightings (and flying saucers) than for any economic or civic reason."

(this article comprised of information and pictures from multiple sources)