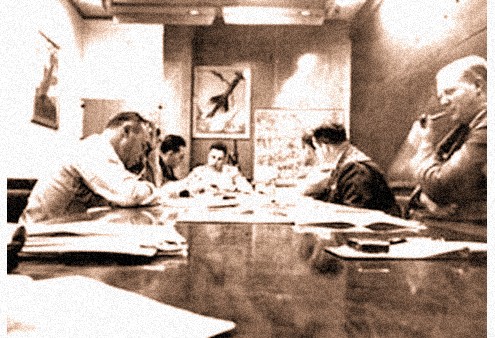 The Army Air Force was, in one form or another, involved in investigating UFOs beginning with the 8th Army's investigation of foo fighter reports during World War II. The AAF also sent intelligence officers to investigate many of the early sightings, but did not, at that point, take them very seriously. However, sightings in 1947 by military personnel of UFOs over Muroc AFB, White Sands Proving Grounds, and other sensitive installations got the AAF's attention quickly. Classified orders went out that all UFO reports were to be sent to the Technical Intelligence Division of the Air Materiel Command at Wright-Patterson Air Field.

In the late summer of 1947, when the Air Force had become an independent branch of the military, Air Intelligence at the Pentagon requested a report from Air Materiel Command regarding what was known about "flying disks."

The Commander of the Air Materiel Command at Wright-Patterson, Lt. General Nathan F. Twining, held a conference with persons from the Air Institute of Technology, Intelligence T-2, the Office of Chief Engineering Division, and the the Aircraft, Power Plant, and Propeller Laborotories of Engineering Division T-3. As a result of this conference, on September 23, 1947, Twining sent a secret memorandum to Brig. General George Schulgen, Chief of the Air Intelligence Requirements Division that concluded:

a. The phenomenon reported is something real and not visionary or fictitious.

b. There are objects probably approximating the shape of a disk, of such appreciable size as to appear to be as large as man-made aircraft.

c. There is a possibility that some of the incidents may be caused by natural phenomena,such as meteors.

d. The reported operating characteristics such as extreme rates of climb, maneuverability, and actions which must be considered evasive when sighted or contacted by friendly aircraft and radar, lend belief to the possibility that some of the objects are controlled either manually, automatically, or remotely.

e. The apparent common description of the objects is as follows:

(2) Absence of trail, except in a few instances when the object apparently was operating under high performance conditions

(3) Circular or elliptical in shape, flat on bottom and domed on top.

(5) Normally no associated sound, except in three instances a substantial rumbling roar was noted.

f. It is possible within the present U.S. knowledge - provided extensive detailed development is undertaken - to construct a piloted aircraft which has the general description of the object in subparagraph (e) above which would be capable of anapproximate range of 7,000 miles at subsonic speeds.

g. Any development in this country along the lines indicated would be extremely expensive, time consuming, and at the considerable expense of current projects and therefore, if directed, should be set up independently of existing projects.

h. Due consideration must be given to the following:

(1) The possibility that these objects are of domestic origin - the product of some high security project not known to AC/AS-2 or this Command.

(2) The lack of physical evidence in the shape of crash recovered exhibits which would undeniably prove the existence of these objects.

(3) The possibility that some foreign nation has a form of propulsion, possibly nuclear, which is outside of our domestic knowledge.

The Air Materiel Command concluded by requesting that the Air Force issue a directive assigning a permanent project to study the phenomenon.

From this report, since declassified, one can make some interesting inferences:

1. The Air Force Air Materiel Command, presumably with access to all of the available information about UFOs that was in existence at the time, had come to the conclusion that they were real, and not all were explainable as natural phenomena or illusions.

2. Although this was almost three months after Roswell, and Twining was at Wright-Patterson, where the Roswell debris was supposed to have been sent, he states that there is a ...lack of physical evidence in the shape of crash recovered exhibits...

By this time, U. S. intelligence had completed its analysis of German projects that were in existence during the War, and had found nothing that could account for UFO sightings, even with post-war continued development in the Soviet Union.

At the same time, the Air Force determined that there was no aircraft construction material in existence at that time that could withstand the stresses resulting from the high speeds and the reported maneuvers of UFOs. In addition, even if the material could be found, the human body could not withstand the g-forces involved.

...to collect, collate, evaluate and distribute to interested government agencies and contractors all information concerning sightings and phenomena in the atmosphere which can be construed to be of concern to the national security.

There is reliable testimony that in August, 1948, the Technical Intelligence Division at Wright-Patterson and Project Sign, decided to make a formal Estimate of the Situation. The Estimate was a top secret document that contained unexplained sightings by pilots, scientists, and other reliable witnesses. The report concluded that UFOs were of extraterrestrial origin.

The Estimate of the Situation was promptly rejected by Air Force Chief of Staff General Hoyt S. Vandenburg. It is said that he deleted the strongest parts of the original report, sent it back, and then, when he received the revised report, he rejected it on the grounds that there was not enough evidence to support the conclusions. Then, after rejecting it, he ordered all copies destroyed. Those inside Project Sign said that their morale and enthusiasm for the project declined sharply after this. Project Sign would soon have its name fittingly changed to Project Grudge.